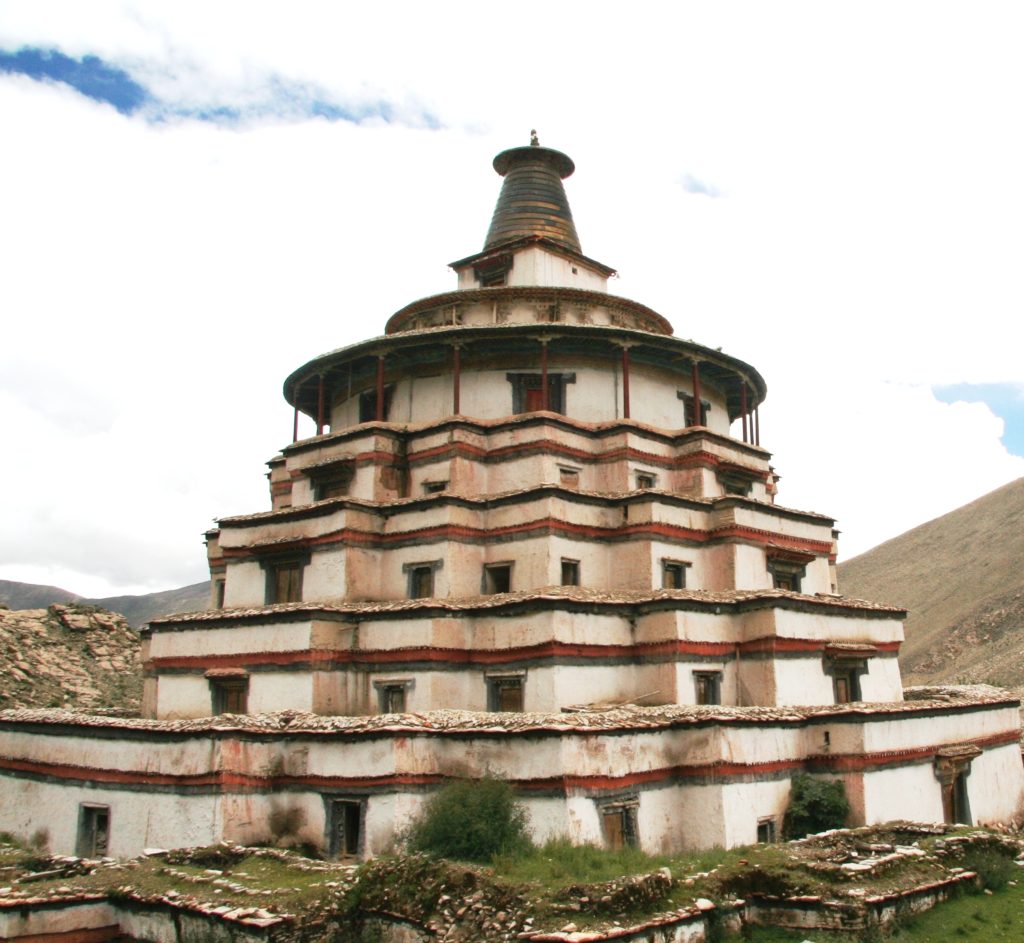 Lodrö Pal was one of Dölpopa’s fourteen major disciples. He was a great Sanskrit scholar who completed a new translation of the Kalacakra Tantra and the Vimalaprabha. Dölpopa personally selected Lodrö Pal as his successor and the fifth holder of the monastic seat of Jonang monastery. Lodrö Pal also made important new additions to the art and architecture of the Jonang stupa.

The great translator Lodrö Pal was born in the far-eastern region of Domey (mdo smad). At the age of seven he began to study under the master Wang Dzongpa (dbang rdzong pa). When he quickly learned to read, memorized the Condensed Verses on the Perfection of Wisdom (sdud pa), and gained a clear understanding of the Hevajra Tantra and the teaching cycle of Yamari (gshed skor), people proclaimed that he was an emanated body. From the age of eight he mastered the Vajrapanjara Tantra and the Samputa Tantra, which are the two explanatory tantras of the Hevajra system, the Bodhisattvacaryavatara, and the monastic code. At nine years of age he traveled to Tanak (rta nag) monastery and received the vows of a novice monk. Next he went to Sangpu (gsang phu), where he stayed until the age of fifteen, studying the literature of the vehicle of the perfections, epistemology, and abhidharma under the abbot Tsultrim Sang (tshul khrims bzang).

Lodrö Pal then traveled to the great monastery of Sakya (sa skya), where he studied under Tönpa Namkha Yeshe (ston pa nam mkha’ ye shes), mastering the monastic code and the literary works of sutra, tantra, and the perfection of wisdom. He also traveled to many monasteries in Central Tibet and Tsang to further his studies, impressing everyone in those areas with his vast learning at such an early age. When he was twenty-five years old, Lodrö Pal traveled to Drakram (brag ram), where he mastered Sanskrit grammar and language under the instruction of the great translator Pang Lotsawa Lodrö Tenpa (dpang lo tsA ba blo gros brtan pa, 1276–1342). After some time Pang Lotsawa commented that since Lodrö Pal was now very learned, he should learn the profound inner teachings of Dharma, and for that purpose there was no master (even in India) more qualified than the omniscient Dölpopa at Jonang monastery.

Lodrö Pal traveled to Jonang, carrying offerings such as a white conch shell, and arrived while Dölpopa was teaching the Vimalaprabha to about 100 expert masters. When he actually met Dölpopa and engaged in conversation, he felt like he was just a mandarava flower in the presence of Mount Meru. From that point on, he stayed with Dölpopa, eventually receiving from him the transmission of all the tantric initiations, scriptures, and commentaries, as well as all the teachings of the literature of the vehicle of the perfections, epistemology, abhidharma, and the monastic code that had been translated into the Tibetan language. At the age of twenty-seven he received from Dölpopa the vows of a completely ordained monk. On that occasion, Dölpopa bestowed special gifts and insisted that Lodrö Pal begin to teach in the great assembly at Jonang. To about 1,000 experts, he then taught various topics, such as the literature of the vehicle of the perfections, epistemology, abhidharma, the monastic code, the Vimalaprabha commentary on the Kalacakra Tantra, and the profound guiding instructions of the six-branch yoga of Kalacakra. In about 1334 Lodrö Pal and Dölpopa’s disciple Mati Panchen (ma ti paN chen blo gros rgyal mtshan, 1294-1376) made a revision of the Tibetan translation of the Kalacakra Tantra and the Vimalaprabha, which came to be known as the “new Jonang translation.” In 1339, when Lodrö Pal was forty-one years old, Dölpopa offered him several sacred objects and enthroned him on the monastic seat of Jonang. In this role as Dölpopa’s appointed heir, Lodrö Pal taught Dharma at Jonang monastery for the next fifteen years.

Lodrö Pal also commissioned sculpted images of the sixteen arhats in the Naga Temple of the Jonang stupa. In the main dome of the stupa, he constructed thirty-two long pillars representing the essence of the thirty-two major marks of a buddha and, representing the essence of the eighty minor characteristics of a buddha, he built eighty short pillars to support the ceiling beams in the podium of the great stupa. Dölpopa was delighted by this and performed the consecrations himself.

When Lodrö Pal passed away, thousands of people gathered for his cremation ceremony, which was accompanied by many miracles, such as glorious rainbows, a rain of flowers, celestial music, and earthquakes. Various wonderful relics manifested in his bones after the cremation.