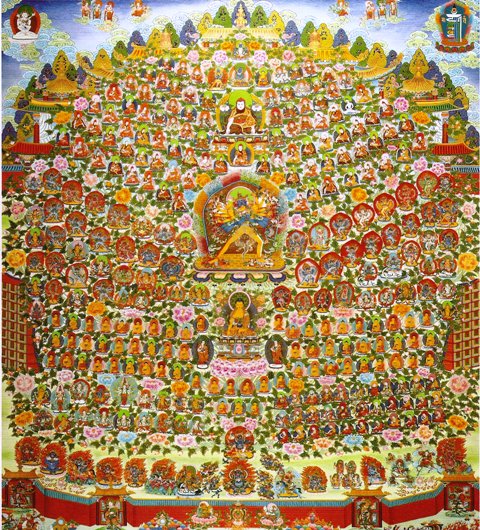 Established in Central Tibet during the late 13th century, the Jonang tradition of Tibetan Buddhism continues on in an unbroken lineage of successive transmissions from the time of the historical Buddha Shakyamuni. Though the Jonang were considered by Western scholars to have been extinct since their 17th century demise in Central Tibet, and were thought to have assimilated into alternative Tibetan Buddhist traditions such as the Nyingma, Sakya, and Kagyu, the Jonang are now known to have survived as their own distinct tradition.

Isolated for almost four centuries within the remote regions of far eastern Tibet, the Jonang continue transmitting their vital views and practices from the Kalachakra Tantra or “Wheel of Time Continuum” while sustaining their unique understanding of mind and reality known as “zhentong” (“shentong”). As the exclusive holders of the 6-fold vajrayoga (six yogas) of the Kalachakra completion stage, and the distinctive zhentong meditative view, this little-known tradition undoubtedly offers a fuller perspective on the whole of Buddhism in Tibet.

A zhentong (gzhan stong) view is one that articulates how the ultimate nature of reality is free from or empty of everything “other” than its absolute nature. In other words, a zhentong view understands how one’s own enlightened essence or buddhanature (tathagatagarbha) is devoid of everything false and superficial.

Zhentong as a view for meditation practice regards relative reality as empty of its own intrinsic existence while ultimate reality is understood to be pure and continuously radiant. The nature of relative reality is known as “emptiness” (sunyata, stong pa nyid), what is devoid of inherent substance, like a dream, an illusion, or a bubble in water. Phenomena’s lack of an essence on the relative level is referred to as “rangtong,” literally meaning what is “empty of itself.”

Accordingly, transient tangible experiences are understood to remain devoid of any inherent substance as the ultimate boundless and luminous nucleus of buddhahood within all beings is regarded as intangible and invariant. This enlightened essence is identical to the indwelling permanently pure nature of awareness, and is understood to be the nature of mind devoid of its distorted perceptions. Likened to an embryo or a womb, this essence provides the possibility for living beings to be reborn into completely awakened beings.

According to Buddhist tantric tradition, the entire Kalachakra Tantra including its generation and completion stage practices were taught by the historical Buddha, transmitted from the mythical land of Shambhala, and sustained in India before being brought to Tibet. Among the transmissions of the Kalachakra that spread throughout Tibet, two main lineages have been maintained: (1) the Rwa lineage and (2) the Dro lineage.

Though there are minor branches to these two main lineages, the Dro lineage has been upheld by the Jonang tradition while the other traditions of Tibetan Buddhism have generally upheld the Rwa lineage. As the Rwa lineage continues to transmit the empowerments and sustain the generation stage practices of the Kalachakra, the completion stage practices known as the 6-fold vajrayoga of the Kalachakra have been preserved within the Dro lineage of the Jonang tradition.

These six subtle and profound stages of yoga from the Kalachakra are: